The term “white elephant” comes to the construction industry from a story of the kings of Siam. According to the legend, the Siam monarchs gifted their unfavorite courtiers with a white elephant. As far as these animals were sacred and thus forbidden from work and expensive to maintain, the gift inevitably led the unfortunate courtier to financial ruin. “The worst trade deal in the history, maybe ever”, if you know what I mean.

In the construction industry, a “white elephant” refers to an extremely expensive to implement and maintain project that no longer fulfills its original purpose. Such white elephants are especially common among sports facilities dedicated to sports mega-events. After the competition is held they remain desolate and unprofitable, due to a lack of demand for such specific infrastructure.

Nevertheless, hosting international competitions is a big honor and a great opportunity to strengthen the national brand. Countries, hosting such events, strive to outdo each other in order to show off their prosperity, create a favorable impression and improve the investment climate. Therefore giving up pomp is not an option.

New Chengdu Phoenix Mountain Sports Park is set to host the 31st World University Games in 2023 and the 18th Asian Cup in 2023. But this time, taught by the experience of the 2008 Beijing Olympics and 2010 Asian Games in Guangzhou, China takes a new approach.

Chengdu Phoenix Mountain Sports Park is conceived not only as a sports mega-facility but also as a public anchor for the emerging Jinniu District. In such a way the property serves both as a venue for national or international competitions and as a district development driver, active regardless of the sports calendar.

The building itself allows flexible use scenarios. It is able to host various sports competitions including soccer, basketball, ice hockey, badminton, table tennis, handball, and gymnastics; as well as other public events in its versatile pavilions with retractable seating and stage options.

The so-called “urban living room” (public square) is set to accommodate different outdoor events, such as exhibitions, concerts, or festivals throughout a year. To promote sustainability the network of public spaces provides a flexible use case among its landscaping.
Mixed-use buildings comprise a hotel, retail, and training facilities for athletes’ convenience and better economic effect. All the aforementioned steps are supposed to guarantee functional adaptibility, so the stadium will not be useless after the competitions. 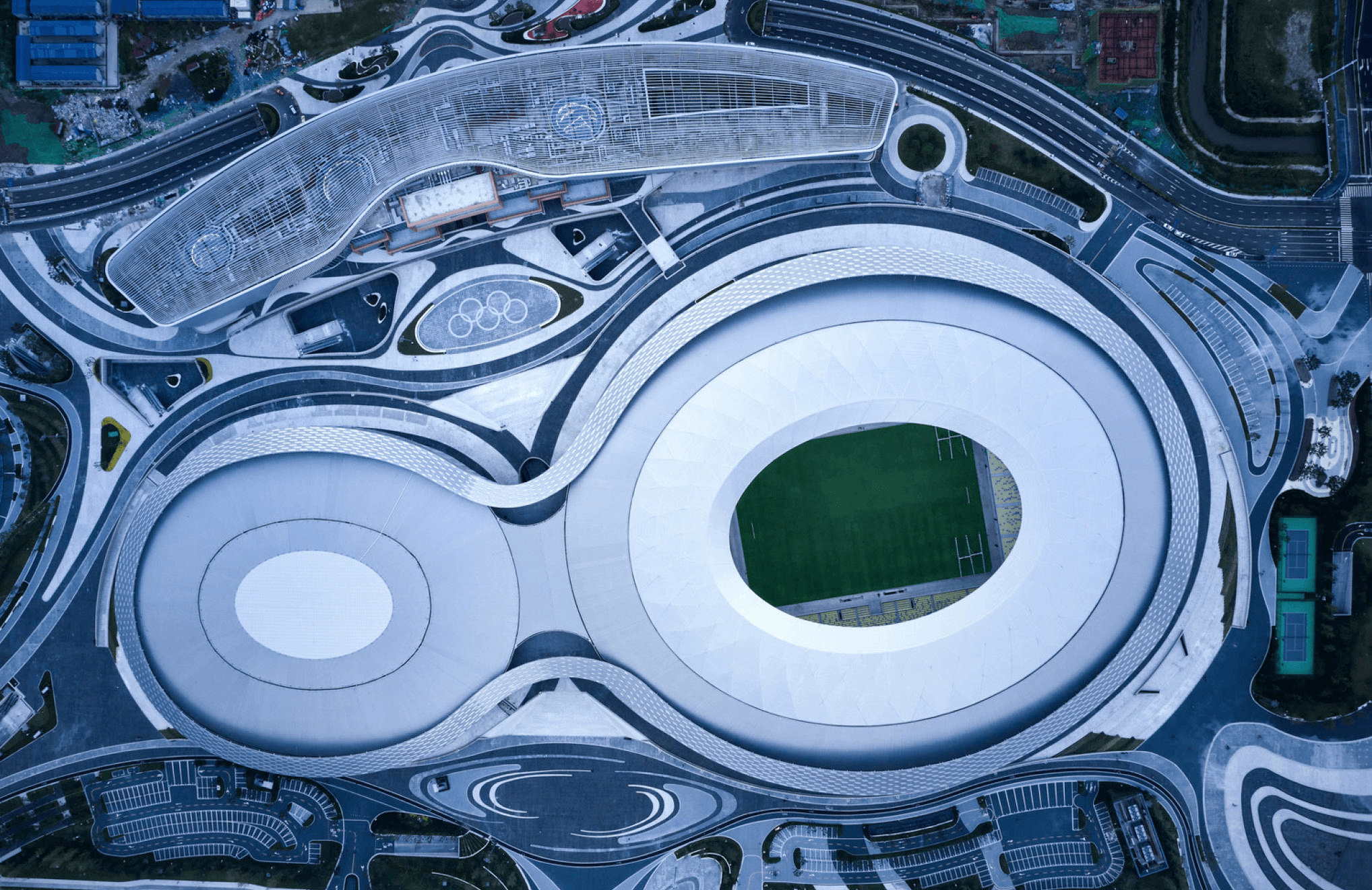 For a better insight into the local context, the HKS worked in collaboration with a local design institute. The building’s volume resembles a traditional Sichuan bowl of tea. Both “bowls” (UEFA and NBA stadiums) are interconnected by a multifunctional bridge structure containing club rooms and a wide public promenade. The building’s facade mimics traditional Shu Jin embroidery. Its multi-layer structure evokes a play of shadows and light that changes depending on the sun position, providing unique experience each minute. 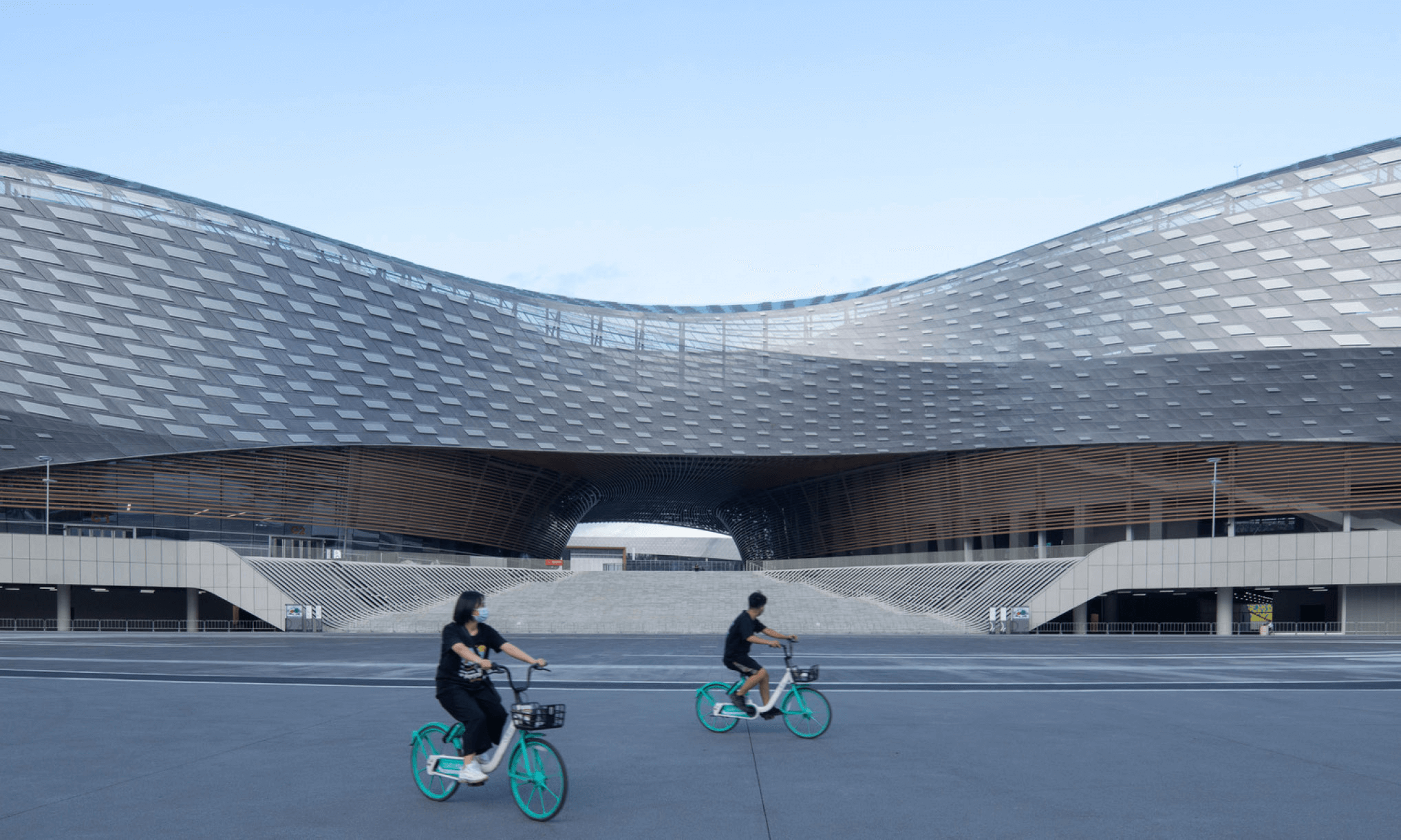 The stadium’s double-curved open cable dome roof is one of the largest in the world. It is also the first open cable-dome structure in the country. The load-bearing construction of the building is made of steel spatial trusses that form a double-curved structure, which is quite a task for modeling and detailing. Its coating is made of a two-layer ETFE (ethylene-tetrafluoroethylene) lightweight translucent membrane, currently the largest in the world.

The ETFE roof shades all seating areas and the field but still allows for natural light and ventilation. At the same time, for the competing athletes’ convenience, it softens shadow casting on the field, In order to avoid visual distortion. 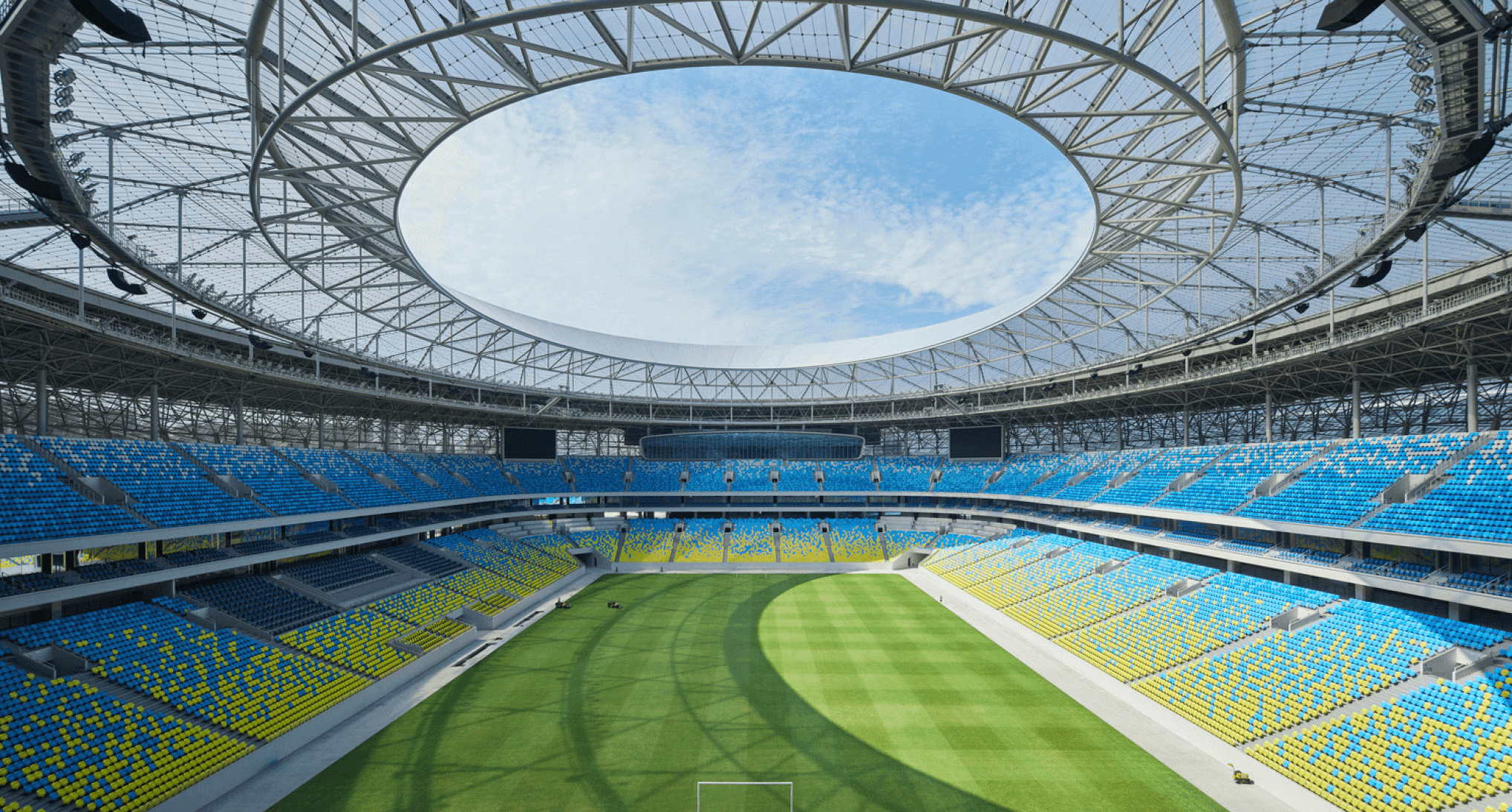 To be as straight as a die, the commissioning of the stadium exactly on the deadline is almost as ridiculous as the day after. Due to the scale of the project and its complex technical tasks, the tight schedule (just 2.5 years from design to commissioning) became the main challenge for architects and engineers.

To fulfill this challenge, the team utilized various programs in the BIM environment. The work was conducted at the third level of BIM (Compliance Level 3). That means everyone, regardless of discipline, works in a single three-dimensional BIM model. 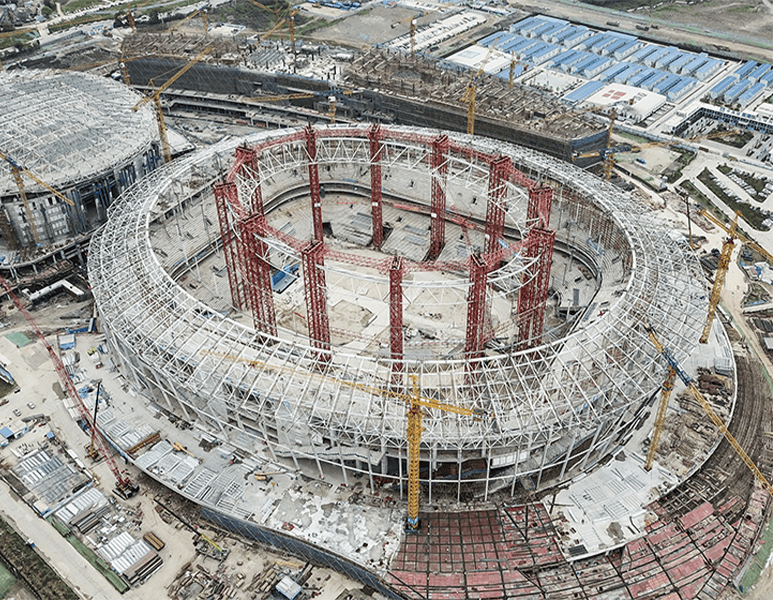 For better accuracy, speed, and efficiency, the team used a range of software from Autodesk AEC Collection and Autodesk Construction Cloud. Preliminary designs and construction drawings were created on AutoCAD. In-depth models of the structure, MEP services, and the membrane roof were developed in Revit, in order to share various information and schedules with manufacturers and builders.

To speed up the process, prefab elements were widely used, which requires special assembly precision. During the construction of the dome, its point cloud (a virtual “cast”) was created several times by 3D scanning. The technology allows for checking the compliance of the design with the construction in order to prevent fatal mismatches between the project and the real building. This technology especially comes in handy when working with complex prefab structures. With the help of the point cloud, it becomes possible to prefabricate even the most complicated parts of the building, without worries that they will not fit on the construction site. 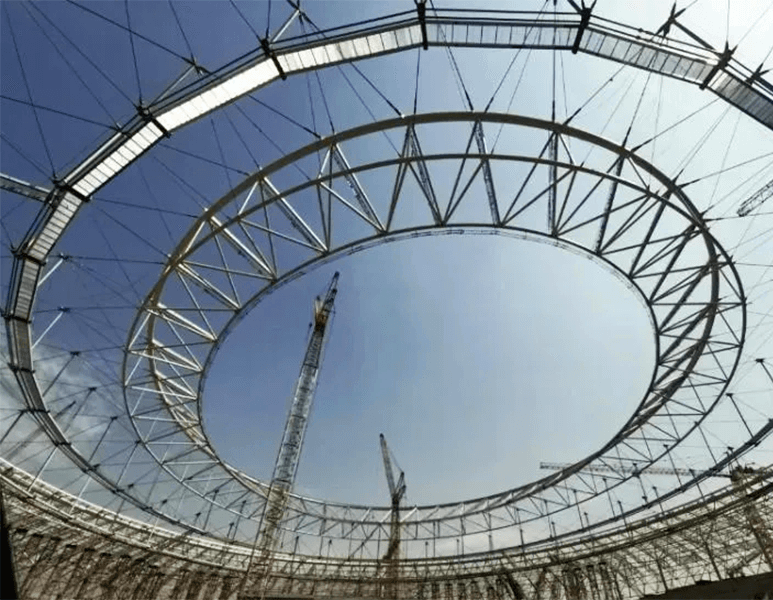 To minimize risks and prevent budget and time overruns the team also used technology known as VDC, or Virtual Design and Construction. VDC makes it possible to run a project virtually to track construction progress, optimize processes, minimize waste, etc. before even breaking the ground. Technology also allows all the parties involved to collaborate in a virtual environment in real-time. In other words, VDC provides the team most current project information, enhancing coordination, and excluding miscommunications.

Thanks to VDC implementation, the workflow becomes more efficient and less risky, while the product quality goes up significantly. Applied properly, it leads to the rational use of material and non-material resources, faults minimization, and in consequence considerable budget and schedule optimization.

For this sake, the team used the BIM 360 platform from Autodesk Construction Cloud. All the building, testing, and project coordination works were carried out in the virtual environment of BIM 360 before doing it all for real on the construction site. To test the construction process, the team digitally pre-assembled literally the whole building. In such a way all possible mistakes and potential problems were detected virtually in the VDC environment. The results of the simulation were carefully analyzed and, in order to avoid repeating these mistakes on the construction site, work plans were adjusted.

Even though the design phase took a little longer, savings in time and budget at the construction stage were substantial enough to cover this over and above. Proper BIM and VDC implementation in the construction process, made it possible to erect such a complicated structure in just 730 days, which is 30% faster than usual. The approach also helped to reduce costs by more than $14.5 million.

Moreover, management of the life cycle of the building (control of operation, monitoring of structures’ condition, and detection of faults) is also carried out in the BIM model. This will positively impact building’s operating costs in perspective. 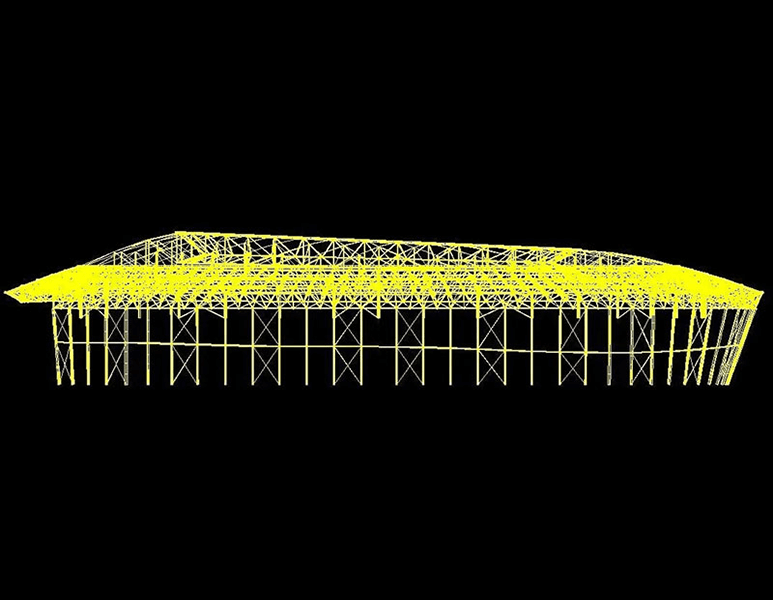 Chengdu Phoenix Mountain Sports Park was commissioned right on a schedule and budget in 2021. The same cannot be said of the 31st World University Games and the 18th Asian Cup, both postponed to 2023.

Whether Chengdu Phoenix becomes a successful Jinniu District urban development catalyst or another one white elephant, time will show. But the fact of the BIM incredible efficiency for budget, schedule, and quality — is an elephant in the room.

Thank you, your message has been sent successfully
We will definitely contact you soon!

Thank you, your message has been sent successfully
We will definitely contact you soon!